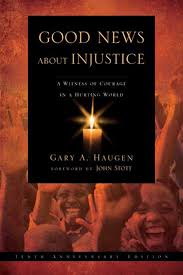 There’s a book I’ve been reading that has been rocking my world the last month.  Good News about Injustice by Gary Haugen.  Quick Haugen background – he is the President and CEO of a Christian organization called International Justice Mission.  From their website, www.ijm.org – “International Justice Mission is a human rights agency that brings rescue to victims of slavery, sexual exploitation and other forms of violent oppression.”  Lawyers, investigators and social workers (like my very good friend, Ann Steffen) dive deeply into the evil of this world in order to bring a few out of the depths of unimaginable atrocities like child sex slavery.

I’ve always been impressed by Haugen, not only for the work that he is doing, but by the fact that he has seen so many horrible things and still fully proclaims that God is good.  It’s not uncommon for me to doubt this.  The book has been renewing this in me once again.

There’s a story that he tells that has stuck with me this week.  I was planning on writing about Richar, but decided to leave that for next week.  =)  Haugen is repeating a story he heard from a Pastor about the very well known feeding 5,000 with the fish and loaves miracle:

This is a ridiculous story.  Since we know how it went down, it seems so silly to think that the people in this crowd would actually let a heap of food pile up around them without realizing that they are supposed to pass it along.  And even sillier that they would grumble against Jesus for not doing anything about it when they had all the resources right in front of them.  Imagine if they had done nothing!  But then my laughter at how preposterous this would be tapers off as I think about what I’m doing.  In what ways can I use the heaps of blessings that I’ve allowed to pile up around me to effect change in this world, be it financially, educationally, spiritually, technologically and with my time?  Haugen goes on to say:

What are you being called to do with the fish and the loaves you’ve been given to pass on to others?

© 2014 The Children's Home Project | Made Awesome by The Blocks Agency